In the days following the fiery April 20 blowout of BP’s Macondo well off the coast of Louisiana, TV viewers across the world watched dismayed at the images of crude oil spewing unabated into the Gulf of Mexico. Their widespread reaction: feelings of utter helplessness.

Mines alumni Bill McElduff ’82 and Donal Fitterer MS ’88 reacted differently. “I told my 10-year-old daughter ‘I have to go out there and help fix the problem,'” recalls McElduff, who watched the underwater footage with his family from his home in Houston, Texas.

The two were old friends, having worked together on numerous occasions before, but the stakes had never been so high. The next four months spent on a football field-sized drilling rig called Development Driller III was a career-defining collaboration for both. To kill the rogue well, they had to hit a target the size of a dinner plate from their floating platform three miles away. And with the world scrutinizing every development, they couldn’t afford to make mistakes.

“We could watch our progress on the Fox News Channel ticker tape,” laughs McElduff, an affable Southerner with a warm Texas drawl. “We all understood the implications of what we were doing.” But they were also confident they could accomplish the goal: “We never had any doubts,” said the more reserved Fitterer.

The evolution of relief wells

As far back as the early 1900s, relief wells have been drilled as a last-resort cure for taming blowouts caused by fires, natural disasters or other oil-field mishaps. Initially, drillers would simply bore another vertical well adjacent to the problem well, relieving pressure from and ultimately depleting the reservoir. But that approach could take months, with oil continuing to spill.

In 1934, after a massive blowout created a lake of burning oil near Conroe, Texas, engineers took a different approach to tame the gusher. They developed survey techniques and directional drilling tools to intersect the problem well from an angle. They then pumped water in to kill the flow of crude. The new tack was a success, and the directional drilling industry was born. In the late 1980s, electromagnetic ranging tools and processes were developed and incorporated into the modern relief well drilling techniques.

Since then, advances in both surveying and directional drilling technologies have enabled an elite squadron of specialized troubleshooters to kill rogue wells around the world from a safer distance and far faster than they once could. As a relief well engineer for Boots and Coots’ considered the go-to company for out-of-control oil and gas wells, McElduff has made his office everywhere from the blazing-hot Syrian desert to the windripped Mauritanian Sea, spending roughly 10 months a year away from home.

As a wireline engineer, computer programmer and ranging specialist with technology pioneer Vector Magnetics, Fitterer has helped tame more than 20 problem wells, from a blazing blowout in the oil fields of Bangladesh to a hurricane-damaged underwater gusher off the coast of Egypt.

He’s quick to point out that the president of Vector Magnetics, Rahn Pitzer ’87, is also a Mines grad, and says it’s no coincidence that the school churned out three leaders in such a specialized, pressurecooker field.

“The number-one thing I learned at Mines was the ability to focus on exactly what needs to happen to get the job done,” says Fitterer. “They are very big on giving you too much to do, so you have to make a decision as to what is most important. That prepares you for the type of work we do.”

Graduating six years apart at Mines, McElduff and Fitterer never knew each other at Mines, but their interdependent skills have brought them together on jobs repeatedly. The two were just wrapping up a routine drill on a rig 30 miles off the coast of New Orleans when the tragedy on the Deepwater Horizon began to unfold.

“We could see the glow from the fire and we knew there was an emergency,” says McElduff. “We figured we’d be on it sooner or later.”

The April 20 fire that killed 11 men and triggered the largest off-shore oil spill in U.S. history prompted a relief response that many have likened to the D-Day armada. More than 8,044 vessels carried 47,848 responders into the gulf, shadowed by a phalanx of media who commenced tracking every move of those the world was counting on to plug the leak.

While officials from BP and the federal government worked around the clock to stem the blowout as quickly as possible, the crew of the Development Drill III rig began drilling a relief well on May 2. The bad news: It would take months to move methodically at an angle through roughly 13,000-feet of rock buried beneath 5,000 feet of water. The good news: It would provide a final and permanent solution, TV viewers were assured.

But many remained skeptical. “That’s the typical response to relief wells,” says Fitterer. “People don’t believe you can do it until it happens.”

For roughly six weeks, the Development Driller III bored downward in the direction of the blown out Macondo well. Then, as the drill bit drew near its target, about 300 horizontal feet, and a perfect aim became imperative, the 10-person specialized relief well team moved into place.

At its helm was John Wright, senior vice president of technology at Boots and Coots, a somewhat legendary character considered to be the godfather of modern relief well drilling. McElduff, Wright’s second in command, served as the lead directional drilling engineer. His job was to guide the bit for the final stretch. Fitterer’s job was to tell McElduff where the bit was and where it needed to go, information he provided using state-of-the-art ranging tools.

“It’s a bit like driving blind with somebody next to you using instruments to tell you where the road is,” Wright told NPR in a September interview.

Positioning is achieved using a 300-foot-long assembly, which includes a 30-foot-long cylindrical beryllium copper tool equipped with a transmitter and receiver on opposite ends. Invented by Vector Magnetics, the device emits a current that sets up an electromagnetic field when conducted by the well casing. By interpreting data on the electromagnetic field picked up by the receiver, Fitterer can calculate the precise distance and direction to the blown-out well. 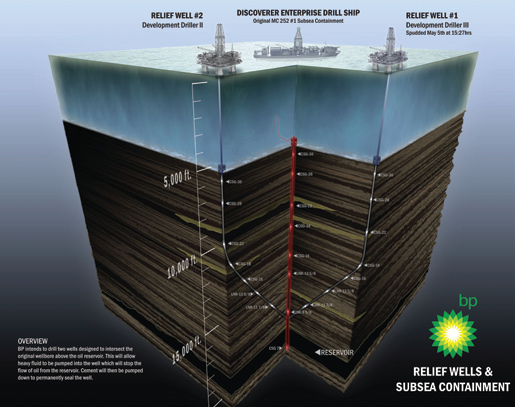 It only takes him two or three hours to collect these measurements, but they must be taken every 30 to 60 feet, and getting the equipment into place at the extreme depths at which they were operating was a very time-consuming process: 24 hours to withdraw the drill bit; 12 hours to lower the ranging tools, take measurements, and retrieve the equipment; and another 24 hours to lower the drill bit back into place. As a result, in the final approach, progress moved at a rate of 30 feet every 2 days.

But precision is everything in this business. Equipped with distance and bearing to the well, as well as the drill’s current orientation (determined from instruments mounted on the drill string) McElduff finetuned the drilling plan. Then, standing next to the driller who was seated in a futuristic control-chair complete with joystick and a complex panel of instrumentation, McElduff directed the bit’s progress as it bored through rock three miles away.

Movement in the drill rig further complicated their work. “This is a floating rig, so it is moving,” McElduff says. “If the rig is moving, the bit is moving, and the rougher the seas get, the harder it is to control the bit.” At one point, tropical storm Bonnie shut down relief well operations for two weeks.

On August 4, BP officials announced that their ‘top kill’ was holding and the flow of oil from the blown-out well had stopped for now. Their mission on board the Development Driller III didn’t change. No one could predict if, or how long, it would hold. A ‘bottom kill’ via the relief well remained the only way to permanently fix the problem.

Their work continued until, on Sept. 17, the nation heaved a true sigh of relief as workers finished pumping mud and cement down the relief well and into the base of the Macondo well.

“Psychologically, it’s important for people in the gulf to understand that there is a stake in the heart of this beast,” said retired Coast Guard Admiral Thad Allen to reporters that day.

How does it feel to be a dragonslayer? Fitterer and McElduff modestly shrug off the title. They just feel lucky they could do something to help, they say.

If you enjoyed the feature story ‘Plugging Macondo,’ then you may find these two videos interesting. One is anoverview of relief well drilling operations; the other is a more detailed look at how Fitterer pinpointed the exact location of the end of the relief well using ranging tools.