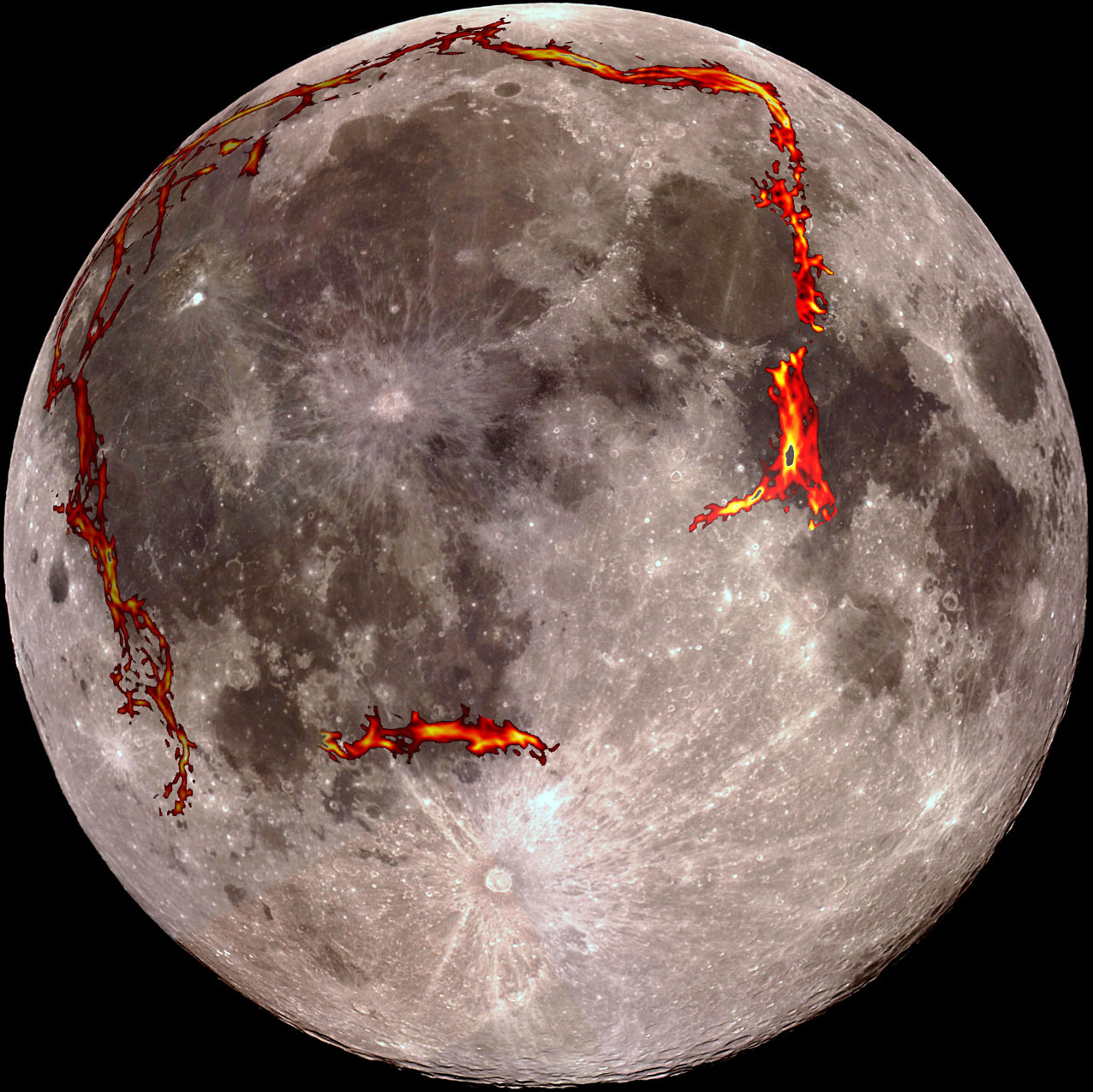 Colorado School of Mines Geophysics Associate Professor Jeff Andrews-Hanna is the lead author of a study documenting the discovery of a giant rectangular structure (roughly 1,600 miles across) on the nearside of the moon. Using NASA’s Gravity Recovery and Interior Laboratory (GRAIL) data, he is part of a team that examined the subsurface structure of the Procellarum region, also known as the ‘Ocean of Storms.’ GRAIL scientists believe the Ocean of Storm’s rocky outline is the result of ancient rift valleys, and not an asteroid impact as some previous theories suggested. The lava-flooded rift valleys are unlike anything found elsewhere else on the moon, and may at one time have resembled the rift zones on the Earth, Mars and Venus.

GRAIL gravity data is now allowing scientists to look beneath the surface at structures that are hidden from view, using the subtle gravitational pulls on the orbiting spacecraft. ‘This dataset has provided us with the highest resolution gravity map of any object in the solar system, including the Earth,’ explained GRAIL principal investigator Maria Zuber from the Massachusetts Institute of Technology.

Using the gradients in the gravity data to reveal the rectangular pattern of anomalies, the researchers can now clearly and completely see structures that were only hinted at by previous surface observations. This newly discovered rectangular pattern has an area of approximately 6.5 million square kilometers (or 2.5 million square miles) and covers 17 percent of the surface of the moon.

‘This rectangular structure covers a larger fraction of the surface area of the moon than do North America, Europe and Asia combined on the Earth,’ Andrews-Hanna said. ‘This goes to show that there are still big discoveries waiting for us on all of the planets.’

The rectangular pattern with its angular corners and straight sides is at odds with the notion that Procellarum might be an ancient impact basin, as that hypothesis would predict a circular basin rim. Instead, the new work suggests that internally driven processes dominated the evolution of this region. In contrast, previous work by Andrews-Hanna and colleagues in 2008 used gravity data from Mars to reveal an enormous elliptical structure in the northern hemisphere of that planet, supporting the idea that the northern lowlands of Mars were formed by a giant impact that excavated the ‘Borealis Basin.’ Andrews-Hanna explains, ‘In two separate studies, we have used gravity data to support the existence of the largest impact basin in the solar system on Mars, and to refute the proposed second largest basin in the solar system on the moon.’

‘Our gravity data is opening up a new chapter of lunar history, during which the moon was a more dynamic place than suggested by the cratered landscape that is visible to the naked eye,’ said Andrews-Hanna. More work is needed to understand the cause of this newfound pattern of gravity anomalies, and the implications for the history of the moon.

GRAIL A and B, later renamed Ebb and Flow, were launched to the moon in September 2011. The twin spacecraft flew in a nearly circular orbit until the end of the mission on Dec. 17, 2012. The gravity field was measured by tracking the changes in the distance between the spacecraft caused by perturbations to their orbit as they flew over anomalous masses caused by features on the surface or within the
subsurface.

The GRAIL mission was managed by JPL, a division of the California Institute of Technology in Pasadena, California, for NASA’s Science Mission Directorate in Washington. The mission was part of the Discovery Program managed at NASA’s Marshall Space Flight Center in Huntsville, Alabama. GRAIL was built by Lockheed Martin Space Systems in Denver.