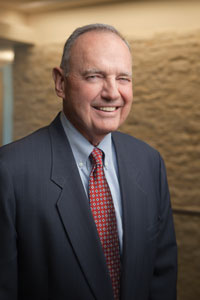 Some people pack their lucky rabbit’s foot when they head to Las Vegas. Others make sure they take the right clothes so they’ll look sharp night and day.

When Charles ‘Chuck’ Shultz ’61 went to Vegas for his honeymoon during his junior year at Mines, he took a slide rule.

“I still had homework to finish,” says Shultz.

It wasn’t the last time that Louanne, his wife, had to make accommodations for Chuck’s education. Shortly after their return to Golden, field camp and summer school kept the newlyweds apart for six weeks.

But if the beginning of their marriage was a test, then they passed: The couple recently celebrated their 53rd wedding anniversary.

After graduating from Mines with a professional degree in geological engineering on a Friday, Chuck drove a packed trailer to Oklahoma City with his bride, reporting for his first day of work at Tenneco Oil on Monday morning.

“At the time, Tenneco and Shell were the only two companies that used geological engineers as geological engineers,” he says. “I wanted to use my degree rather than be just a pure geologist or a pure engineer.” Shultz put his education to work in a variety of exploration and production roles in the 28 years that followed. When the company was sold in 1988, he was senior vice president of international and marketing.

After the sale, he left Houston for Calgary, Alberta, to become president and CEO of Gulf Canada Resources.

“It was a position with a lot of risk in a different country and culture, but the business fundamentals were the same and Gulf Canada had a staff of top-quartile people,” Shultz recalls. “Upon my departure in 1995, the company had made a remarkable recovery.”

Now, Shultz is chairman and CEO of Dauntless Energy, a family-owned upstream oil and gas firm founded in 1995. Its most significant project is an interest in the largest carbon dioxide-enhanced recovery-oil project in Alberta, which injects about 19 million cubic feet of CO2 waste a day underground to produce oil previously considered unrecoverable. Shultz says it’s the equivalent of removing 70,000 cars from the highway.

Dauntless is Shultz’s ‘spare time’ job that “often gets taken care of at night,” he says with a chuckle. During the last 25 years, he has served on more than 29 corporate and not-for-profit boards, including Newfield Exploration, an independent company that specializes in the exploration and production of crude oil and natural gas; Enbridge, the largest oil pipeline in North America; Canadian Oil Sands; Matrix Solutions, a private environmental services company in Shultz’s hometown of Calgary; and the Sinneave Foundation, a nonprofit organization that conducts research for autism.

In 1996, he was the founding chairman of Canadian Oil Sands, which holds 37 percent of Syncrude, one of the world’s largest producers of synthetic oil from oil sands. He helped Canadian Oil Sands grow its value from $400 million to more than $5 billion. That same year, he was the founding chairman of Matrix Solutions, which now operates in four provinces in Canada. He has served on the Newfield Exploration board since 1993 and is currently lead director.

One of the more memorable board appointments was when he became the founding chairman of Graf Canada, a hockey and figure skate manufacturing company that has since grown into a significant player in the North American market. Shultz was elected chairman with the understanding that he would never be seen wearing Graf skates on ice.

“I can’t skate, and it would ruin the company’s image,” he says.

The first chair of the Mines President’s Council, Shultz received the Mines Distinguished Achievement Medal in 1986. He currently serves on the Mines Foundation Board of Governors and as co-chair of the university’s $350 million Transforming Lives campaign.

Recently, the Shultzes established the Chuck and Louanne Shultz Scholars Program that supports the men’s and women’s swimming programs at Mines. “Our daughter was a captain of the Mines swimming team, and you always do what your daughter wants,” says Chuck. The Shultzes have also committed a $250,000 (Canadian) seed gift to the university to establish the Shultz Family Leadership in Humanitarian Engineering Fund.

Their daughter, Julie King ’86, is just one of many family members to attend Mines, along with their son-in-law, Scott King ’85, and Louanne’s father (John Christmann Jr. ’36), uncle (Charles Christmann ’49) and nephew (John Christmann IV ’88).

“I can’t help but get a twinge on the back of my neck when I look up at the M on the mountain, whether it’s during the day or night, because of how fortunate I was to get an education there,” Shultz says. “I wasn’t the best of students and I learned how to fail there. A successful career has some failures. At Mines, you learn how to fail. You don’t fear failure as you forge ahead in your career. I think we have too many young people who fear failure and, as a result, they don’t take risks. Helping young people succeed, whether in university or business, is the most satisfying reward there is.”