Are Women the Mining Industry’s Most Underdeveloped Resource Once legally barred from working in mines, women have spent decades battling for a place in the industry. Today, mining companies are finding that in addition to bringing valuable skills, female leaders are good for the bottom line. 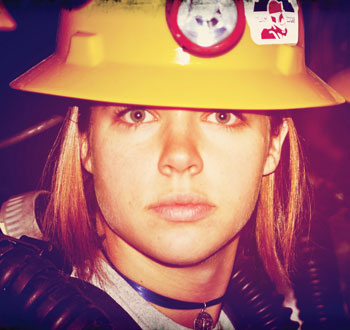 In 1969, Betty Gibbs ’69, MS ’72 graduated from Mines armed with the third mining engineering degree the school had ever granted a woman (the first since 1920). She’d toiled nine years for it, juggling her studies with a part-time job and raising her daughter, but as she began to show up for job interviews, she was greeted with superstition and hostility.

Colorado, Wyoming and many other states still had laws on the books expressly prohibiting women from working underground. Myths that they were too fragile or brought bad luck abounded. On two occasions, Gibbs was refused entrance to mines due to her gender. “I know for a fact that most miners would walk off the job if a woman entered their mine,” a spokesman for the Colorado Bureau of Mines told the Rocky Mountain News in a story referencing Gibbs’ graduation. Betty Gibbs ’69, MS ’72, shown here in 1967 when still a student, was only the third woman to graduate from Mines with a degree in mining engineering.

Nevertheless, she persevered, becoming the first woman to work underground at Colorado’s Climax mine and quietly opening doors for generations of women to come. I “wasn’t out to prove anything,” says Gibbs, now executive director at the Mining and Metallurgical Society of America. “I just did my work, and eventually I was appreciated for it.”

Fast-forward to today when the mining industry not only is more accepting of women, but, in the face of mounting research showing that companies with more gender diversity enjoy greater profitability, improved safety records and higher social and environmental responsibility ratings, is also actively courting them.

According to the Bureau of Labor Statistics, about 13 percent of the mining industry is now female compared with less than 6 percent at the time of Gibbs’ graduation. At Mines, 17 percent of mining engineering degrees in 2013 were awarded to women compared with 6 percent in 1998. And, interestingly, the new head of the Department of Mining Engineering, Priscilla Nelson, who took over the reins in January, is the first woman ever to head the department.

These are all steps in the right direction, says Jessica Kogel, a senior manager at Imerys with close ties to Mines. But she and others say the industry should do more to take advantage of the attributes women leaders can bring to a company. A new report published by PricewaterhouseCoopers in collaboration with Women in Mining (UK), ‘Mining for Talent 2014,’ states that mining ranks dead last among global industries when it comes to women in leadership positions. Among the world’s top 500 mining companies, only 7.2 percent of directorships are held by women. Among the top 100, women make up just 10.3 percent of boards of directors.

“Research has shown that there are huge benefits to having women in leadership roles, yet it is still very common for me to be the only woman in a conference room or board room,” says Kogel, who is the outgoing president of the Society for Mining, Metallurgy and Exploration (SME). “We have a long way to go.”

According to a 2012 Credit Suisse Research Institute report, the stock market performance of companies with at least some female board members outdid those with all-male boards by 17 to 26 percent over a six-year period. And according to the PWC report, ‘There is a striking correlation between return on assets and the number of women on boards,’ pointing out that over a six-year period, companies with all-male boards averaged a loss of 2.86 percent while boards with two or more women posted gains of 6.40 percent.

Meanwhile, research by McKinsey & Company suggests that women tend to have a knack for teambuilding: “They are particularly good at defining responsibilities clearly, and mentoring and coaching employees.”

“This is really about business results,” said international banker Mervyn Davies in a recent interview encouraging the industry to better promote gender diversity. “The more diverse the thinking in a team, the better the results.” The Mines women’s team took first place at the Intercollegiate International Mining Games held on the Mines campus in spring 2013. The university also has a women’s mine rescue team.

Golden resident Barbara Filas, a semiretired former president of Geovic Mining who mentors Mines students, says she opted to go into the mining program at the University of Arizona on the advice of her older sister.  ”She got a degree in fashion merchandising,” Filas recalls. “When she got a 10-cent-an-hour raise, she told me, ‘Whatever you do, don’t go into a women’s field.'”

Filas graduated in 1978, as the last laws banning women from working underground were being repealed (thanks to several class action lawsuits) and the Equal Employment Opportunity Commission was pressuring companies to hire more women. She, too, faced hostile interviewers.

“When I applied for my second job [at a U.S. Steel mine], the first words to come out of the guy’s mouth were, ‘I don’t have any use for women working in the coal mines,'” she recalls. “I said, ‘I am not going to be intimidated.'” She got the job and proceeded to climb the ladder to executive positions in several companies, not by stressing gender differences, but by competing head to head. “I never played the female card. I always just tried to jump higher and run faster than anyone else.” Today, she advises Mines students to do the same.

When they do, the rewards can be plentiful, says Kathy Steele ’89, who holds a degree in mining engineering. “You can put your kids through college, take care of yourself and own your own home. It gives you freedom,” says Steele, a single mom and chief engineer with Newmont Mining’s Phoenix mine. She says that employees can make anywhere from $65,000 to $150,000. Yet she has trouble filling positions. “There is a need for engineers, male or female. I have to hire them from outside the country.” Kristin Guerin ’11 works in Australia’s outback monitoring Caterpillar’s massive new automated trucks; she is one of three women on the company’s staff at the Solomon mine.

Kristin Guerin ’11, a mining engineering graduate,  as drawn to the industry for its unique challenges, travel and the opportunity to ‘do something more offbeat.’

As a member of Caterpillar’s autonomous haulage solutions team at the remote Solomon mine in the Australian outback, she works 12-hour shifts, one week on day shift, one week off, one week on night shift, one week off, staying in dormitory-style lodging on-site and flying back to Perth during her time off. As one of three women on the Caterpillar crew, she’s charged with monitoring the company’s massive new automated trucks. Aside from her uniform not fitting quite right, she says she sees few gender differences in her work.

“I love being outdoors, I like the attitudes of everyone I work with and I love the instant gratification,” she says. “It’s nice to be able to say, ‘We moved that block of earth today.'”

Already, several companies, including Anglo American and BHP Billiton, have reportedly set targets for boosting the percentage of women on boards. And organizations like SME host programs such as the Women of SME Breakfast and the two-day Emerging Leaders Alliance to cultivate networking and mentoring opportunities. Roughly 10 percent of SME’s membership is women, but among the 30-and-under set, that number is now closer to 20 percent, a sign that efforts to attract more women to the industry may be working. In January, Priscilla Nelson became the first woman to head the university’s Department of Mining Engineering.

Going forward, the key to boosting gender diversity rests in letting women of all ages know what mining has to offer and helping them achieve these rewards, Nelson says. “The pipeline issue is huge.”

According to the U.S. Department of Education, women earned 57 percent of all bachelor’s degrees in 2013, yet fewer than one in five engineering degrees went to women. And when it comes to technical master’s degrees, Nelson says that women are less likely to pursue one to begin with and more likely than men to drop out before completing it.

In her new position, Nelson hopes to encourage more women in the industry to become mentors. She also aims to improve the graduate school experience for women and interest more U.S. students overall in pursuing degrees in mining engineering and related fields.

“It is an edgy, interesting and challenging industry with a lot of benefits,” Nelson says. “The more we can relate that story, the more people will want to get into it, and that includes women.”

More on women in mining: “Mining Coal and Undermining Gender” by Jessica Rolston, Hennebach Assistant Professor of Energy Policy in the Division of Liberal Arts and International Studies Engineering on a Grand Scale with the Smallest of the Small