A Look into Austrian Flags 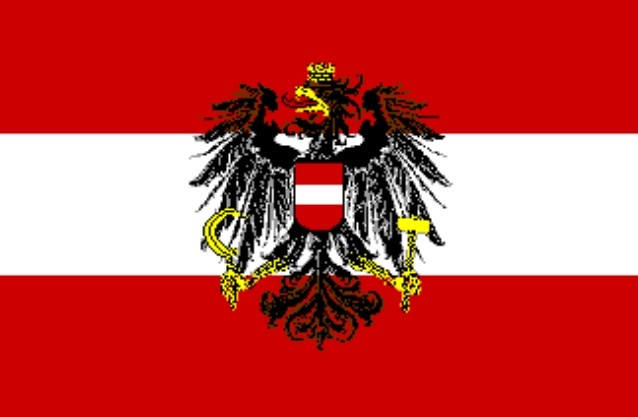 I have spent some time now looking at the Austrian flag and wondering what exactly it stood for. Every flag has a special meaning, and the more I saw the Austrian flag embedded with the coat of arms, the more curious I became. I finally took the initiative and asked some locals what the symbols meant, filling in any blanks with a little research of my own. Let’s start with the colors. The Austrian flag has three stripes, two red and one white. According to my colleagues here at the university, the red stands for strength and bravery while the white stands for peace and honesty. Personally, I do believe the Austrians very much take these ideals to heart. Honesty, for example, is very highly valued here. Out of the many subway and bus rides I’ve taken here in Austria, I’ve been checked for tickets maybe once or twice. Even with this ticket checking being a rarity, every single Austrian I know buys tickets simply because that is the right thing to do. Instead of taking advantage of the system, they follow it with integrity, something I find quite amazing and very much respect.

The next symbol that stands out in the flag is the eagle, symbolizing Austria’s sovereignty. Even though it may be a small country, they are quite proud of where they are today, and with good reason. It is a beautiful country with quite a history.

The mural crown on the flag represents the middle class, a remembrance for the people who made the country what it is today.

Along with this ideal is the sickle, symbolizing agriculture. Agriculture is a large part of the nation’s history, and Austrians commemorate this foundation with the symbol on the flag.

Along with agriculture, the nation was built on mining and industry, which is what the hammer stands for. This symbol in particular is quite popular in Leoben, as the town was founded around mining (quite similar to Golden, actually).

The broken chains on the flag symbolize the liberation from National Socialist Dictatorship. While Austria is proud of its past, like any country there are dark periods of history. And like any country, Austrians celebrate the freedom of the light after the dark periods.

Finally, there is the escutcheon, the emblem of Austria, a symbol that can be found all over the nation. In addition to the Austrian flag, each state has its own flag as well. Leoben is located in Styria, so that will be the flag I am going to focus on. Styria is known for its beautiful nature, something I can very much attest to. With the beautiful mountains, rolling green foothills and vast rivers, Styria has everything an outdoor lover could dream of! It is no surprise, then, that Styria is known as the “land of the green heart.” It is because of this that the Stryian flag embodies the colors green and white.

Focusing even closer within Styria, there is one prominent symbol in Leoben that I would like to share as well. Above the main “old” building of the university is the phrase Glükauf with two crossed tools beneath it. This was the phrase that was said before the miners entered the mines decades ago. It essentially means “good luck,” as many of the miners who entered below didn’t return because the work was so dangerous. A bit intimidating that “good luck” is written above the main entrance to the university, but I love it here nevertheless!

One final thing that I found quite interesting was the Easter egg tradition that is prominent here. As April drew near I noticed that many trees around Austria had Easter eggs hanging from them. A majority of the people in Austria are Catholic and Easter is a huge holiday. To celebrate, people all over the country decorate eggs and carefully blow out the insides, leaving the beautifully decorated thin shells left to hang from the trees. It is similar to the tradition of decorating Easter eggs back home, but the idea of hanging them from the trees is very different and something I very much enjoy.

That’s all for now! Hope you all have been enjoying the past few months as much as I have.