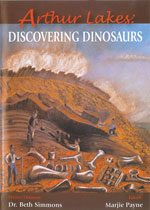 Arthur Lakes role in the discovery of the first T-Rex fragments near Morrison, Colo., in 1874 is captured in a recently released 60-minute documentary titled, ‘Arthur Lakes: Discovering Dinosaurs.’ The documentary includes reenactments and an interview with Bruce Geller, director of the Mines Geology Museum, who describes Lakes as the originator of the museum. Lakes taught geology, drawing and writing at Mines from 1876 until 1893. DVDs are available for $19.95 at the Geology Museum and the Dinosaur Ridge gift shops (dinoridge.org).

Watch a 9-minute excerpt from the documentary here: