Letter of Golden Past

Andrew Patten ’53 was flipping through the summer 2008 issue of ‘Mines’ magazine recently when a photo caught his eye. He subsequently sent this detailed discussion of landmarks visible in the image, which we’ve published below. It appears we were off by at least 14 years with out estimated date for the photo of 1908. We are grateful to Andrew for his input and his analysis.

I was looking at an older issue of the subject magazine and noted the two interesting photographs on page 52. The date of the top photo caught my eye and as I studied the photograph I noted that my grandfather Hemberger’s home that he built in 1922 was in the photograph labelled C. Based on the white stucco home (I remember it well) which makes it stand out, the 1908 date captioned on the photo would be too early, the date being sometime after 1922. The address of this white stucco home was 711 15th St. This home was also built by my grandfather Hemberger about 1907, and it still stands. Still standing is the “Pike House” due east of the 710 address. I don’t know if the descendants of Zebulon Pike lived there or not. I just remember ever since a small boy, it’s been known as the Pike House. It is still there.

The top photo includes the only(known) photo of the railroad trestle (M), from which Woodruff and Seminole were hanged December 1879 . The two were dragged from the jail in the courthouse (B) by a lynch mob for the murder of a local farmer. My grandmother, who was six years old at the time, told me about it. She pointed out to me that the jail from where they were lynched was in the ground floor of the southeast corner of the courthouse.

Next to the courthouse was the county jail (A). Contained in this jail were dungeons for the most dangerous criminals. My brother (deceased 2007, age 81) wrote: 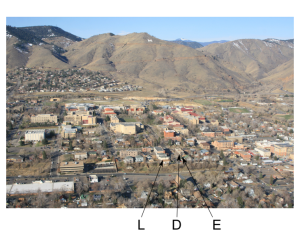 “I played in these dungeons in the 1930s with the Sheriff’s son, Willie Morris. There were 6 to 8 dungeons, varying in size from large to small, There were big, black holes with big doors that locked using handles that had to be lined up to open and close them, as in a combination lock. We were always scared that someone would close those doors and lock us in (no one did). When we played there they didn’t use them to house prisoners because they had forgotten how to use the locks. Willie Morris and I worked and worked and figured out the combination. Then they used them to house prisoners again. The Sheriff’s wife cooked meals for the prisoners in the upstairs cell blocks.”

My brother, five years older than I, would come home and tell about playing in those dungeons. I listened with awe. I was too young to be allowed in them, but one day I sneaked a peak and never went back to that scary place.

The old Sig Ep house shows up well (item N). It was white, just as the photo shows, which makes it easy to spot. The old chemistry building (item G) stands witness to Tom Wyman’s pouring the water into the acid, rather that the other way around in 1950. Tom learned quickly that you’d better listen to what professor Clark said.

Professor Francis Smiley’s home (item L) stands out well. He and his family lived there in the 1940s and 1950s. He was a professor of Civil Engineering. His home still stands at the end of 15th St. on the south side.

I hope that this is of interest to you.