Unscripted Innovation: The new CoorsTek Center for Applied Science and Engineering acts as an epicenter for collaboration at Mines Mines is known for being at the forefront of innovation and progress, and its campus is no exception. Campus architecture reflects the institution’s 144-year legacy, with a balance of longstanding landmarks and sleek new structures, all of which continue to elevate Mines’ reputation as a center for collaboration and advancement. When coupled with another well-known name in materials science—CoorsTek—the possibilities seem endless.

In 2014, CoorsTek and the Coors family made a historic $27 million donation to Mines, funding the design and construction of the newest addition to campus, as well as providing the opportunity for new high-tech equipment and sponsoring a graduate research fellowship program. The state of Colorado also provided $14.6 million in funding for the building’s construction.

Now the largest building at Mines, the CoorsTek Center for Applied Science and Engineering enables the expansion of a longstanding academic, research and career partnership between CoorsTek and Mines.

A leader in the manufacturing of technical ceramics for semiconductor, medical, automotive, oil and gas and other industries, CoorsTek is a natural fit at Mines. The new space allows the company and Mines to further their research goals and continue to be leaders in materials science and engineering.

“For CoorsTek, our investment in Mines is not only an investment in the future of our company and a great university—it’s an investment in solving global challenges in energy, transportation, information technology, the environment and the quality of human life itself,” said John Coors ’77, chairman, president and CEO of CoorsTek, when the initial investment was announced. “This partnership between CoorsTek and the Coors family, the state of Colorado and Colorado School of Mines is not about a building. It’s about something much more. It’s about connecting students, researchers, faculty and industry to impact the world in ways that we can’t even predict today.”

The state-of-the art facility acts as an epicenter of collaboration, housing innovative university, government and industry activities, such as the planned Mines Materials Institute (MMI), the planned International Center for Multiscale Characterization (ICMC) and the Alliance for Development of Additive Processing Technologies (ADAPT).

“There is no end to the possibilities that research into advanced materials holds in making the world measurably better,” Coors said. “Our decades-long partnership with Mines has already yielded not only many such developments that have accomplished this, but also some of the best materials scientists and engineers at CoorsTek and the industry generally. We expect many more of both in the future.”

The opening of the CoorsTek Center enables Mines to remain at the forefront of groundbreaking research. With several new research centers and industry partnerships, researchers and scientists can explore new possibilities and pursue breakthroughs in materials science.

The planned MMI will bring together researchers from ADAPT, ICMC, the quantum theory lab and other materials centers across the Mines campus and partner organizations. The institute is intended to be a flexible space where researchers, faculty and students from several departments will co-locate with researchers from CoorsTek, the National Renewable Energy Laboratory (NREL) and the National Institute of Standards and Technology (NIST) to work on materials projects that require cross-cutting expertise.

“If we can provide a space where researchers with different backgrounds and expertise are interacting, collaborating and exchanging ideas, unforeseen and great advances at the interfaces of traditional fields will emerge.”

The ICMC labs within the CoorsTek Center were purpose-built for state-of-the-art materials characterization. The suite of instrumentation in the labs allows researchers to characterize materials on the atomic scale all the way up to the macro scale.

“The ICMC labs in the CoorsTek building will enable research in many different areas of materials research, including metallic alloys for the automotive and aerospace industries, ceramics for structural and high-temperature applications, next-generation fuel cell and solar cell materials, next-generation battery materials and our understanding of geologic processes and our earth history.”

Mines has an extensive relationship with NREL and NIST. The CoorsTek Center brings researchers together into a shared space to continue to strengthen those connections and leverage the assets of all collaborators. Mines faculty, staff and students work alongside CoorsTek, NREL and NIST researchers to catalyze innovation at all levels, from fundamental materials discovery to manufacturing and processing and, ultimately, demonstration and deployment

The new facility also expands the capabilities of the ADAPT consortium. Dedicated to solving challenges in additive manufacturing using data-driven approaches, the ADAPT research facilities are moving from Brown Hall into the CoorsTek Center within the next year to better fulfill its mission in the collaborative space. The new facility allows ADAPT to continue to grow its technical capabilities and enhance the scope of their work.

When initial plans were created for a new building on campus, Mines knew it would be a state-of-the-art, interdisciplinary facility that would elevate the research pursuits of its faculty and students. Yet the building itself also needed to fit in with the look and feel of the Mines campus, while serving the needs of the researchers and scientists who would call the new
building home.

“Peter Bohlin has a signature design style that is reflected in both CoorsTek and Marquez Hall,” said Chris Cocallas, Mines’ executive director of capital planning and design. “The aesthetics that tie the design to Mines is the blond brick seen throughout campus and the gray metal panels that were introduced in our newer buildings about 10 years ago.”

A curtain of glass panels forms the northern façade, overlooking Kafadar Commons and providing stunning views of the Mines campus and Mt. Zion from the building’s upper floors. A floorplate extends out over empty space at the northeast corner, with the upper three floors cantilevering out from a concrete wall and braced frames between each level.

The building also has six exterior vertical glass fins that project from the south façade, which required support between the first and second levels. W8 posts were installed to account for the weight of the fins and wind load. The steel support is hidden behind the brick veneer to create a floating effect.

With high-tech research equipment going into the new building, vibration performance was also a main design consideration. Though most vibrations from day-to-day activities are often below human perception, they can affect the performance of the highly sensitive microscopes and lasers in the labs. To account for this, lab equipment was placed on thick, vibration-isolated slabs on grade where space allowed.

The natural cohesion of the Mines and CoorsTek aesthetics and missions allowed for a fresh and modern addition to the Mines campus that enhances the collaborative partnerships and research crucial to the school’s vision for the future. CoorsTek’s commitment to collaboration with Mines allowed the purchase of new technology to advance the capacity of the research at Mines. One of these purchases was the FEI Talos microscope, a world-class analytical transmission electron microscope that is the first of its kind in the
United States.

The technology delivers fast, precise, quantitative materials characterization in multiple dimensions, with new software features that are designed to improve imaging and usability. The microscope is used to view thin specimens through which electrons can pass and is capable of capturing fine details—as small as a single column of atoms—and produces high-resolution images to characterize a wide range of material specimens.

“In order to measure a material down to a single atom requires highly specialized instrumentation that also requires a very stable laboratory environment,” said Brian Gorman, associate professor of metallurgical and materials engineering. “The CoorsTek donation of a new analytical transmission electron microscope is one such piece of instrumentation, and the building allows us to maximize its capabilities, as well as plan for future acquisitions.”

With this versatile system, scientists and engineers have unlimited possibilities for discovery and advancing the potential for materials research at Mines. 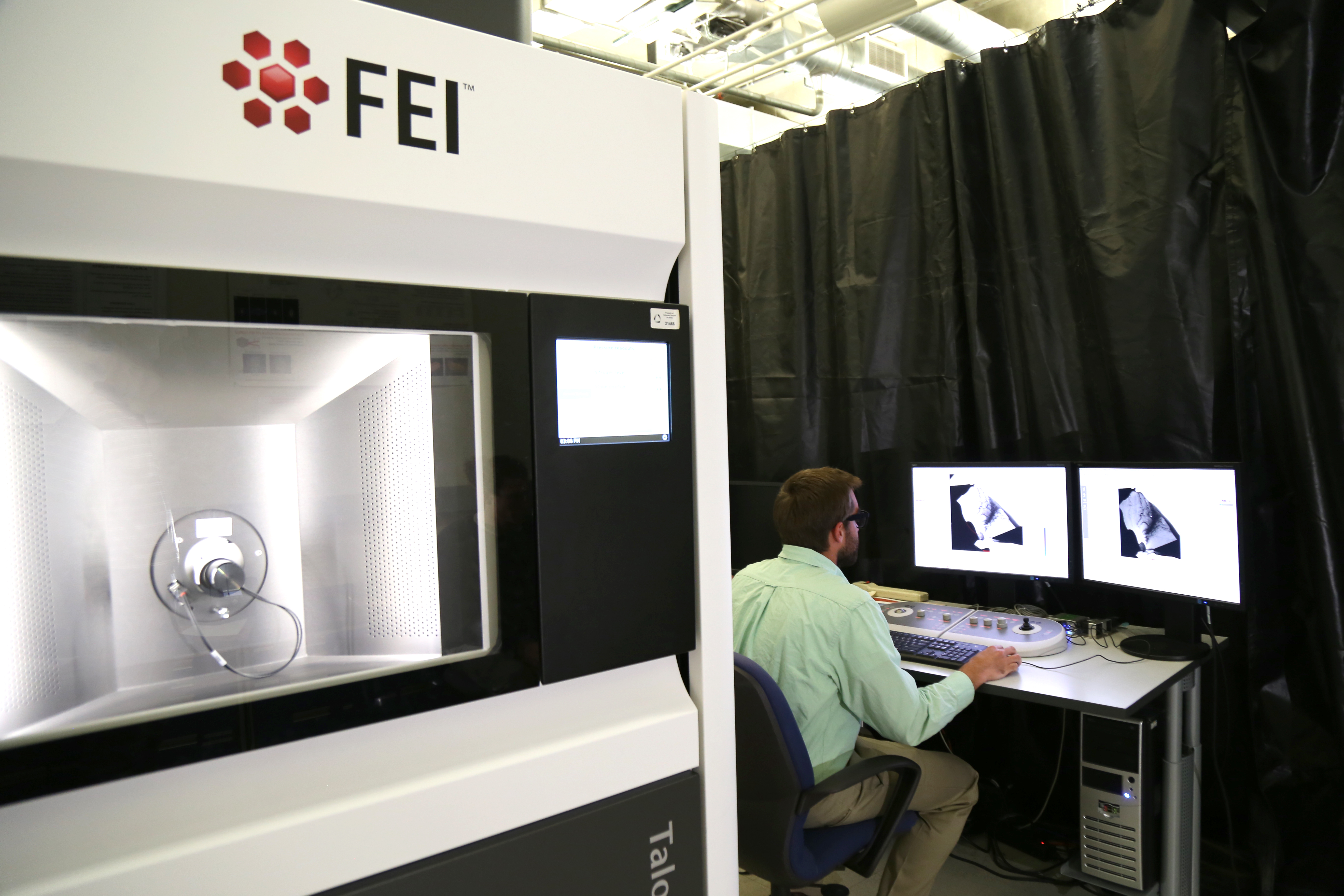