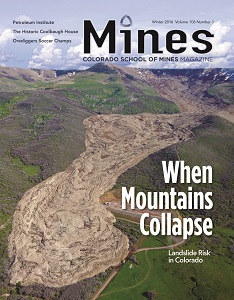 Paul Santi examines a complicated section of the Rio Chama landslide during an expedition to the site in June 2015.
(Credit: Robert Dunn)

The landslide that collapsed near the Rio Chama River in southern Colorado put the old riddle that begins with “if a tree falls in the forest…” to its extreme test. At some point, likely in spring 2004, a mass of rocks and earth crashed down a stretch of the San Juan Mountains, falling almost 1,200 feet to the meadow below. The debris scattered over a track roughly half a mile long, knocking down trees and leaving behind stumps, some of which today point in the direction of the slide.

The tumult would have been deafening. But, as with the proverbial tree that fell in the forest, no one was around to hear it.

The headwaters of the Rio Chama lie in a quiet corner of the Rio Grande National Forest, right on the border between Colorado and New Mexico. So, the landslide went largely unnoticed until recently, when a geology enthusiast from Colorado spotted the gray trail left behind by the falling rock in Google Earth images.

Today, the Rio Chama landslide is the focus of a research effort led by scientists at Mines. Like forensic detectives piecing together the scene of a crime, these researchers are trying to recreate a geologic event that no one witnessed. “We want to look at how it occurred. Is it likely to move in the future, and are there other areas nearby that may have the same problem?” says Paul Santi, head of the Department of Geology and Geological Engineering at Mines. The project is one of the most recent efforts to emerge from a collaboration between faculty at Mines and the Colorado Geological Survey (CGS), a government agency that studies the state’s natural resources and hazards. In 2013, the Colorado legislature transferred the CGS to Mines, making it an official part of the university.

The Rio Chama project is about more than just marveling at Rocky Mountain geology. The scientists hope that by exploring the conditions that triggered the isolated landslide, they can better predict when similar hazards might strike other areas of Colorado—where, unlike in the Rio Chama wilderness, people and infrastructure sit in harm’s way. This photo shows the view upvalley of the West Salt Creek landslide in Mesa County (note the geologist at the right center for scale.)
(Credit: Jon White/Colorado Geological Survey)

The project highlights the benefits that come from the new partnership between Mines and the CGS, says Karen Berry, director of CGS and Colorado’s State Geologist: it provides scientists who study landslides with a platform to help make Colorado a safer place to live. “It gives students a chance to be exposed to real world problems right in their backyard, and it helps us leverage the limited resources that we have to do more work and impact more lives across the state,” says Berry.

The Rio Chama landslide plunged down the mountain seven miles from the nearest campsite, at an elevation of 9,000 feet. In June 2015, Santi hiked to the site with a research team that included two Mines graduate students and Wendy Zhou, an associate professor in the Department of Geology and
Geological Engineering. The way was tough going: on the trip in, the snowmelt was so heavy that every meadow the researchers crossed was covered in about a half an inch of water, Santi says. They forded several ice-cold creeks, too. At one point, they had to pick up a fallen log and drop it over a rushing stream in order to get across. “I’m guessing we were the first people to be out there since elk season,” Santi says. “As geologists, we love that. It’s your own personal wilderness.”

In many ways, that wilderness setting was a good thing. Because the landslide occurred so far from the nearest town, no one was hurt. Colorado’s history, however, hasn’t always been so kind. Landslides are common in the state, Santi explains, in part because of what draws many people here in the first place: the region’s steep terrain and rugged slopes. “I tend to view mountain landscapes as something that are always on the verge of instability. They’re eroding, and they don’t want to be extra-stable,” Santi says. When it comes to landslides, “it doesn’t take much to kick these things off.”

The term “landslide” encompasses a number of different kinds of events with names like rock avalanches, soil topples, and sturzstroms. The Rio Chama event, for instance, was a type of landslide known as a rockslide. But they all have something in common: debris, and a lot of it, that tumbles down a steep slope. Santi’s work focuses on another type of landslide called debris flows—hazards made of a soupy mix of mud, logs, and other debris that builds up during rain storms and can careen downhill at speeds of up to 20 mph. Local populations sometimes pay a steep price for landslide events: in 1903, a debris flow ran onto a railroad track near Glenwood Springs, Colorado. The resulting damage caused a train accident that killed one person. In 1924, a large landslide near De Beque Canyon in western Colorado diverted the flow of the Colorado River when it poured into a section of the waterway. More recently, in 2014, the West Salt Creek landslide roared down a mountain slope in Mesa County near the town of Collbran. The landslide was 2.8 miles long (in horizontal distance) and covered an area of nearly one square mile. Three men were caught in the debris, which moved at speeds of 50 mph or more—much faster than Santi’s debris flows.

But even relatively minor landslides can damage property and infrastructure, including homes, roads, and gas drilling wells. In Colorado, roughly $2.3 billion in infrastructure owned by the state sits in areas that may be vulnerable to landslides, according to estimates from the 2013 Colorado Natural Hazards Mitigation Plan¹.

The CGS has studied that same instability for decades, says Berry. One of the agency’s inaugural tasks when it was formed in 1907 was to draw up a corner-to-corner topographic map of Colorado. Today, the CGS helps the state tap its natural resources, such as uranium formations and oil shale deposits. But it also seeks to reduce the dangers inherent to the Rocky Mountains. “One of our key missions is to reduce economic losses to the people of Colorado and to increase public awareness of natural hazards,” Berry says. “Of course, landslides are a big part of that.”

Since joining Mines, CGS staff have partnered with university faculty on a number of landslide research efforts. The agency also funds research projects by Mines scientists, including the Rio Chama study. And these collaborations have already born fruit. In September 2015, the CGS published an extensive report on the West Salt Creek landslide with help from Santi and other Mines scientists. The report concluded that the event was set in motion when a massive block slipped and rotated from the mountain slope. That failure caused a cascade of falling rock that stretched for 2.8 miles, making it the longest recorded landslide in Colorado’s history.

Santi himself walked on the debris left behind by that event. He was joined by the brother of one of the men who had died in the collapse. “It’s just eerie being out in something that looks like a meteorite hit it,” Santi says. “There are trees that are fallen in every direction that you’re stepping over.”

But according to Berry, there are good reasons that scientists study disasters like these in detail—to make sure that no one else dies in accidents like this one. When it comes to landslides, “the key to predicting future behavior is looking at past behavior,” she says. A researcher surveys a debris flow on Porphyry Mountain, west of Jamestown, Colorado.

That past behavior was on display at Rio Chama. On theirtrip out to the wilderness, Santi, Zhou, and their students climbed almost to the top of the mountain’s scarred surface—an experience that Zhou says left her with three bruised toenails. The team’s goal was to map the geology of the collapse,
documenting what sort of material fell during the event and where. If you spot a boulder covered in lichen, for example, then you’re likely in a spot that hasn’t experienced a landslide in several decades. Crushed rock, on the other hand, is likely a sign of recent upheaval.

The team’s initial findings suggest that the rockslide moved a bit like a skier zipping down an alpine slope, Zhou says. At first, the debris fell quickly, rushing down a steep section of the mountain. Then it slowed down as it reached a flatter portion of the slope. Some of that debris, however, was pushed to the edge of that saddle where it tipped over, falling several hundred feet more to the valley below.

In the end, the researchers hope to discover what started this geological disturbance in the first place. To kick off a landslide, Zhou explains, a number of conditions need to come together. “There’s a comparison to playing baseball—you have three strikes,” she says. The first is the most obvious: steepness. In order for earth to come crashing down, you need to have a slope that tilts up at a sharp enough angle. Then there is the material that makes up a hillside itself. Loosely held-together rocks and silt, for instance, are much more likely to fall apart than solid stone. The final ingredient is water. Rain or snowmelt can seep into a mountain slope and weaken its surface, priming a hillside for failure. “As long as you have those three strikes, you’re very prone to landslides,” Zhou says.