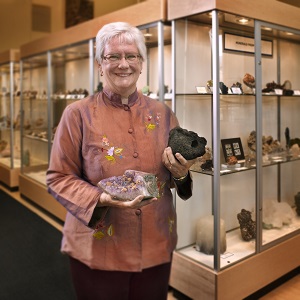 After dedicating nearly 45 years to Mines and being the longest serving female faculty in Mines history, it’s safe to say that Catherine Skokan ’70, MS ’72, PhD ’75 was—and still is—an important leader in the Mines community. Although she retired at the end of the 2014-2015 academic year, she is still very involved with Mines and its students. “Retirement means that I don’t have a paycheck from Colorado School of Mines, and I don’t have an office. It doesn’t mean anything else,” says Skokan. And her connection to Mines is something she is not ready to give up.

Skokan first came to Mines as a student at age 17, receiving her degree in geophysical engineering in 1970. She was one of only a dozen or so female students, but that didn’t bother her. She was very involved in the Mines music program, playing the bassoon in the marching band and singing in the choir. Despite the challenges associated with being one of the few female students on campus—such as when a professor assumed that a chemistry experiment explosion was hers when it really belonged to the male student sitting next to her—she pushed through and did what she wanted to do. “I did just fine by myself, thank you very much,” she says.

Skokan went on to make history when she became the first woman to receive a graduate degree from Mines, receiving her master’s degree in December of 1971 and her PhD in December of 1974. Although her achievements are important marks in the Mines history books, Skokan didn’t even realize that she was Mines’ first female PhD recipient until about 10 years after she graduated. “That shows you how much anybody paid attention,” she says. “We were just too busy doing it.”

While it was never Skokan’s intention to teach—she originally thought she wanted to work for the U.S. Geological Survey—she soon found herself back at Mines teaching linear systems at the insistence of Dr. George Keller, then the head of the Geophysics Department. She discovered that she enjoyed teaching, even though she disliked linear systems as a student, and continued in the Geophysics Department for nearly 20 years.

In 1996, Skokan moved to the Electrical Engineering and Computer Science Department as a tenured associate professor. Over the years, she was recognized many times for her teaching, receiving distinctions such as Outstanding Professor in Geophysics, Excellence in College Teaching from the Colorado Association of Science Teachers, the Alfred Jenni Fellowship Award for Educational Scholarship, and the Gold Award from the Engineering and Environmental Geophysics Society. In 2010, Skokan became a research faculty member, regularly working on educational outreach projects with the Trefny Institute for Education Innovation. “I’ve enjoyed working with teachers and trying to get them excited about science and engineering,” she shares. “It’s a really fun thing to do.” Cathy Skokan, pictured here as a freshman in 1966, played the bassoon in the Mines marching band. (Courtesy of Cathy Skokan)

Skokan’s involvement with the university goes far beyond the classroom. After earning her degrees, she continued her activities with the music program, becoming a temporary string conductor (until the orchestra became too large). Despite her recent retirement, she still plays violin in the orchestra, the bassoon in the band, and the urhu in the Chinese band. “I’m not going to give up the orchestra, nor the marching band, nor the Chinese band,” she says. “The best thing about the school is, of course, the students, so this way I still get to have fun with the students.”

Skokan also travels frequently and organizes trips for the Mines music program, including the upcoming trip to Dublin, Ireland, during spring break in 2016. She also spends much of her time lecturing on cruise ships, educating passengers about geology and geophysics. In February 2016, she will travel to Indonesia to lecture on the country’s earthquakes and volcanoes.

Skokan’s “spare time” remains dedicated to what she loves, and she has no plans to give any of that up in the near future. Although she was the first woman to receive a PhD—or any sort of graduate degree—from Mines, she says it’s not about the accolades, but about doing what she loves. Her advice for students following in her footsteps? “Do what you want to do and enjoy it. Because it is fun.”